The Miracle of (Truffle) Love

It was an early Christmas miracle... my awesome friend and PR woman extraordinaire Holly Krassner scored me a pass to the non-feast portions of the Napa Valley Truffle Festival! And it was tremendous.
I sat in on the Saturday sessions, following the Grower/Scientist curriculum.  The keynote speech by "Well-seasoned Traveler" Doug Duda kicked things off with fun tales of surly French farmers, overly friendly truffle dogs, and the people who squeal at every mention of the t-word.  Some high notes from the speech and ensuing discussion:
Thanks to Todd Spanier, the Re dei Funghi (King of Mushrooms), Mr. Duda was able to brandish a real truffle as he delivered his concluding remarks.  Incredibly, no one charged the podium--though many rushed Todd afterwards to pose for a picture with his enormous truffles and silky golden cloths.
The first seminar session I sat in on addressed the science of truffle cultivation, and was led by the shy guy with the German accent who sat next to me at the keynote.  Dr. Alexander Urban, it turns out, is a full professor in the Department of Systematic Evolutionary Botany at the University of Vienna, and author of such sleeper hits as “Frontiers in Ectomycorrhizal Symbioses Explored with Molecular Phylogenetic Methods,” and more recently, “In vitro mycorrhization of clonally propagated woody plants.”  Fortunately, his passion for truffle studies is infectious, which greatly helped the audience digest the dense information on mycorrhizal organisms he presented.  I came away with what felt like a full college quarter under my belt, which I attempted to summarize here for WineCountry.com.
Much remains to be deciphered about the truffle fungus' life cycle, particularly the mechanism or process that prompts the fungus to "fruit" and produce the truffle we all want to eat.  Dr. Urban ran through the long history of truffle cultivation attempts in Europe, and noted the key environmental factors essential for the survival of each of the three most desired species of truffles--Burgundy summer, Périgord black, and Italian white.  He showed us wildly varying sites in France, Austria and the Netherlands that all have successfully produced Burgundy and/or Périgord truffles, stoking our lust to break ground on our own orchards, stat.  Then he crushed us with the news that the Italian white, Tuber magnato, whose haunting fragrance and delectable peppery flavor command 4-5 thousand dollars per pound, has thus far resisted human cultivation of any kind.  Woe were we.
Dr. Paul Thomas of the American Truffle Company stepped up to deliver a short overview of how his company helps would-be truffle farmers create, cultivate, and manage financially successful truffle orchards using lots of scientific monitoring and their accumulated research and experience from partnering with farmers all over the world.  But, since he couldn't very well give away the milk for free, he was pretty tight lipped about the results of his new research into the hormonal communication between truffle fungus and host trees that may prompt fruiting. 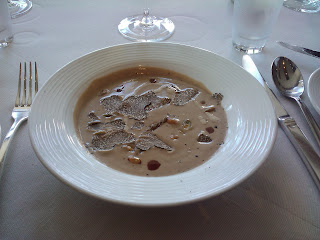 After hours of this torturous foreplay, it was finally time for our truffle lunch at La Toque.

First course: a roasted chestnut and porcini mushroom soup, garnished with toasted pumpkin seeds, pumpkin seed oil, truffled crème fraîche, and generous shavings of Burgundy truffles.
This dish was, quite simply, orgasmic.  The chestnuts had a subtle caramel sweetness that complemented and punctuated the warm earthiness of the mushrooms and pumpkin seeds, as well as the sexy funk from the tender Burgundy truffle slices. 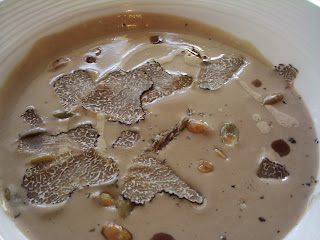 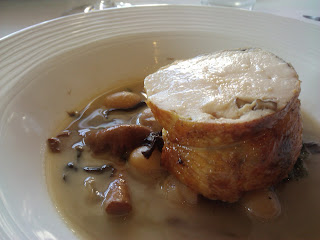 The second course of truffle lunch was a juicy chicken breast roulade with black truffle slices tucked discreetly under the skin, and a wonderfully aromatic parmesan broth bathing a medley of black trumpet and chanterelle mushrooms and fresh kale.  This too was delicious, but after that mind blowing soup, it was kinda hard to notice.
Dessert was a mignardise-type plate of chocolate covered almonds, white chocolate pumpkin seed brittle, and biscotti--none of which contained truffles, disqualifying the plate from appearing in this blog.
After lunch we were off to the brand new, just-planted Périgord and Burgundy truffle orchard at Robert Sinskey Vineyards' Ramal Road property in Carneros, which had been created in partnership with the American Truffle Company. 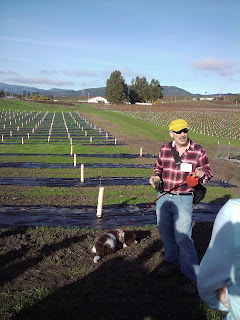 Sadly, even I must confess that a truffle orchard in its infancy isn't much to look at.  Anticipating this lack of visual excitement, perhaps, American Truffle Company CEO Robert Chang had accompanied us to help explain the work that had been done, what was being done now, and what was expected in the future.  Bill Collins had also brought his 6-month old Lagotto Romagnolo puppy Enrico  Caruso (Rico for short) to cavort around in the mud and otherwise charm the assemblage with his antics.  Lagotto Romagnolo dogs are the traditional breed used for truffle hunting in Italy, and based on the rooting and digging he demonstrated that day, Rico clearly has it in his blood.
﻿﻿﻿﻿﻿﻿As we learned about expected yields of truffle orchards, we passed around some extra truffle-inoculated baby trees that hadn't made it into the ground.  Sinskey used two different types of trees for its orchard: live oak, which produces truffles more slowly at first but continues to produce for decades, and filbert (hazelnut) trees, which produce truffles faster than oaks, but also have a shorter productive life.  We got to fondle both.  The picture below is a baby filbert tree with truffle fungus in its roots, which costs about $20.
﻿ 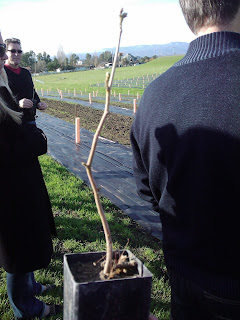 I was ready to buy one of those trees then and there, but wasn't sure I'd be able to raise my backyard's pH levels in time to get the tree in the ground before winter... and oh yeah, it takes 4-8 years for a tree to start producing truffles. So, not exactly the best impulse buy.  I put away my wallet.
Mr. Chang told us that Sinskey's was the first truffle orchard planted in Carneros, but noted mysteriously that there is another one in the works "near Kenwood," and that several other property owners "in the area" were also starting up some truffle farms.  He was optimistic about Carneros' prospects for truffles, but also very favorably inclined to the Calistoga area.  We shall see... in a decade or so.
The following day, I swung by the Festival's Epicurean Marketplace to check out the wares.  You may recall that this was the $15 portion of the event, but I have to say that this experience was worth far more than the price of admission.  The King of the Mushrooms was there with his queen, who live just a short drive away in San Mateo and who were full of advice on what to do with your real, fresh truffles.  They had set out an assortment of truffle samples they had made, from truffled white polenta squares to truffle infused San Francisco Vodka--a brilliant idea, by the way, that tasted as good as it sounds.  They also were selling fresh truffles right there on the spot... so I bought one.  It was my first, and it was beautiful. 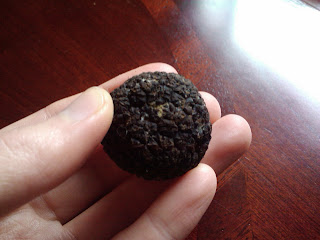 You may be afraid to ask what I did with it, but I will tell you.  First I shaved off its tough outer "bark" with a paring knife to expose its tender, moist interior.  Did I toss these bark-like shavings? Yes, directly into a bottle of fresh vodka to steep for a few weeks.  I have big plans for those cocktails, and not a scrap of truffle went to waste. 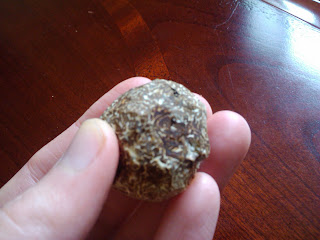 So there it was, my denuded and fragrant little beauty.  I rubbed it in butter to protect it from the air until I was ready to chop it up and use it for my decadent dinner of buttery soft scrambled eggs, full on French baveuse style.  Once the eggs were almost set into their gooey custardy perfection, I julienned half the truffle and stirred the slivers in to heat through as the eggs hit their last minute of cooking.  I cook eggs this way a lot using truffle butter to finish them, but this was a totally different experience with the real thing.  Muskier.  Dirtier.  A sordid delight unlike any other.  When it was over, my girlfriend and I both needed a cleansing shower.
On the advice of the Mushroom King, I preserved the other half of my naughty little truffle beyond its natural two week freshness window by chopping it up and covering with cooled clarified butter, then storing in the freezer.  I will be breaking that badboy out at Christmas dinner.  Oh, yes I will.  Whether anyone else in my family gets some is another question entirely.
Posted by Deirdre Bourdet at 9:43 AM

Deirdre Bourdet
Napa Valley, California, United States
I am the principal and Chief Eating Officer of Hedonism Ink, a freelance writing and culinary consulting business based in Napa Valley. Armed with a liberal arts background, ten years of lawyering, and a culinary degree and wine certificate from Paris, I specialize in passionate and intelligent writing for the food, wine and travel industries. My journalistic work has appeared in a number of outlets, including WineCountry.com and tablehopper as well as this blog and others. Please visit my website hedonismink.com for more information, or email me at hedonism [dot] ink [at] gmail [dot] com to share your news about the fun stuff.

Links to other fun things